Last night was the final Spring PCRS race (#12), held under sunny skies and mild temperatures. Being the last race of the series, many people attended in costume (?) and hung around after the race for BBQ and cereal malt beverages. Prizes were given out and a general good time was had by all. Oh, and we had a race. 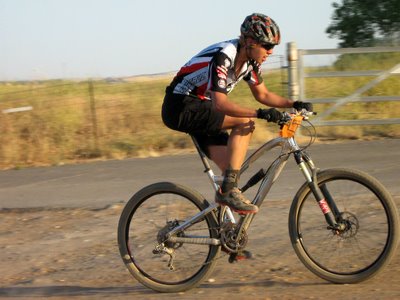 The course was one of my favorites: north from the parking lot, down into the valley, around the motocross track winding back up the hill to a nice dropoff then home. They say the course clocked in at 3.1 miles and 305' of climbing per lap, but my GPS showed only 2.9 miles. Either way, it was a really fast and flowy (?) track with the largest jump / dropoff (probably 24") of the series. 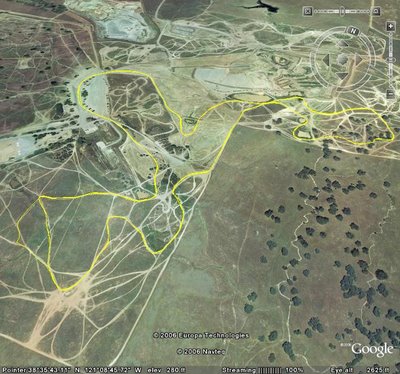 I had a decent race. My first lap was pretty fast with the leaders, although I started to slip during the second lap. I regrouped a bit for the last lap and if I hadn't run off course during the final downhill section (damn photographer :>) I would have had descending lap times. Probably finished towards the middle of pack. Photos and results should be posted sometime later tonight.

While this finishes the Spring PCRS series, the Fall PCRS series starts up in August. Also there is the Series Raffle and Awards BBQ on July 12th, 2006.
Posted at 3:57 PM

Get NorCal MTB Racing news in your RSS reader, email or calendar